” The propulsive beat and jagged rhythms leap and reflect off of stacked synth chords and a commanding vocal hook.”
-Under The Radar

“No Security” is a sonic hardware assault, capturing the paranoia and instability of the current era while casting an infectious spell over the dance floor. “
-The Brvtalist

Zachery Allan Starkey has released “Fear City” with Bernard Sumner of New Order. An immersive dark techno journey into the contemporary urban nightmare of New York City’s dark after hours underworld, “Fear City” combines Starkey’s evocative songwriting and synthesizer playing with Sumner’s innovative production and instrumental work. The resulting collaboration pushes both Starkey and Sumner into new territory. “That’s my nightmare, that’s my dream, barely living…thriving in the chaos in between,” Starkey sings, documenting life in New York City during the current COVID-19 pandemic and economic collapse. Sumner matches Starkey’s lyrics and melodies with some of the darkest electronic instrumentation work of his career, recalling his time in Joy Division. “Fear City” is a song firmly rooted in the present.

“Fear City” is the second collaboration between Starkey and Sumner, following the recent release of their anthemic club track “Force”, which garnered glowing reviews from music publications across the globe. Starkey’s “Force” and “Fear City” also mark the first brand new studio recordings from Sumner since the release of New Order’s 2015 LP, Music Complete. Starkey opened for New Order during the Music Complete tour.

Starkey talks about the process of making “Fear City” with Bernard Sumner:

“I wrote ‘Fear City’ about Brooklyn’s late night after hours scene, and people who deal with dead end jobs, low pay, and a sense of hopelessness by heavily indulging in vice. I have spent considerable time in this world, I have been one of these people, and ‘Fear City’ is about being trapped in this cycle, a reality for many. ‘Fear City’ is about how COVID-19 has crippled New York’s economy and morale. It is the key song on the album, because it brings together the themes of New York nightlife with current international economic/political fears, and the Coronavirus pandemic.

I think Bernard’s work on ‘Fear City’ is fantastic. Bernard really nailed the vibe of my song with his production and synth work, he took my original instrumentation and melodies, and he made them even darker and more intense with his own playing. I then revised my parts of the song to creatively match what Bernard had done. I think we inspired each other to get more experimental. I’d been trying to nail the right tone for the lyrics, and when I heard how Bernard evolved the track musically, it put me in the right spot emotionally. I sat down and revised the lyrics and vocal parts in one go, then upped the effort on my synth parts. Bernard and I found a very cool musical synchronicity on ‘Fear City’, I think we made something special.”

“Like me, Zachery originates from a post industrial landscape of urban decay and forgotten people, which once thrived and brought great wealth to both our nations. In my case in Manchester, England, the favour has not been forgotten, and it is now a thriving City again. In Zachery’s case, the industrial heartland of America still sleeps, waiting for the men who reaped the profits to remember the people they left behind.

Zachery’s passion for creating music led him to buy a one way train ticket to New York City, leaving behind the working class existence he grew up in Columbus, Ohio. He arrived in NYC with no job or connections. Ten years later, he’s ensconced and well known in the music and club scene in Brooklyn, which plays a large part in his life. Zachery independently releases his own records, and is dedicated to songwriting and club music in his own way.

I feel a kinship with Zachery. He’s at the start of his journey. I wish him luck, he deserves it. His music is his lifeline.”

On their concept for the ‘Fear City” music video, Furusho says, “Zachery is always walking in his videos – it’s symbolic of his love for New York City- but I kept wondering, where is he going? Directing the Fear City music video was my chance to answer that question for myself. NYC has always been a home for the disenfranchised, for those who wouldn’t fit in anywhere else. We’ve built this dodgy, dark, hard, maze of a home. There is no escape, no relief, and we love it dearly. I wanted Zachery to be our Virgil, guiding the viewer through the purgatory of NYC and showing us the grime and madness that he sees every day. He’s not going anywhere, none of us are. We are all entwined in the endlessness of Fear City.”

“Fear City” is released on Starkey’s own label, Deathtrip NYC, with artwork designed by PJ Ong of Inodoro TM. “Fear City” was engineered by Abe Seiferth and mastered by Jon Chinn. The entire FEAR CITY album will be released on April 30th. 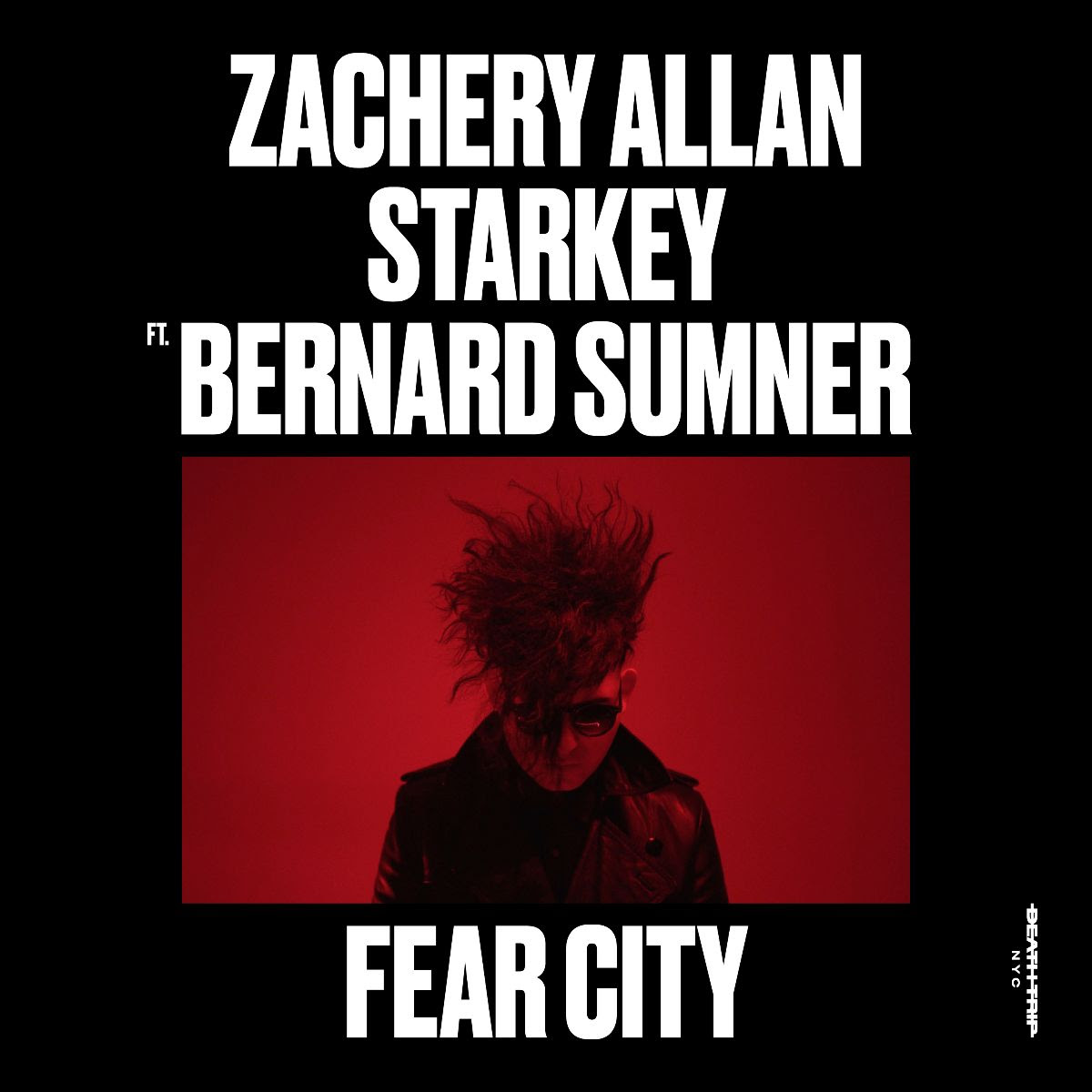 Zachery Allan Starkey is a New York City based Composer/Musician/Producer who uses analogue synthesizers and electronics to craft dark, melodic, and heavily emotional dance floor journeys. Starkey garners the influences of Techno, Electro, House, Post-Punk, Italo Disco, SynthPunk, and HI-NRG, pulling elements from this spectrum to create his own unique sound of self-expression. He has released his music both as Zachery Allan Starkey and as ZGRT.

Some of Starkey’s previous accomplishments include the ZGRT single “CONNECTION”, an uplifting, House inspired ode to finding solace in solitude that received a glowing review in PASTE Magazine. Next came release of the third ZGRT single, via Post-Punk Online, the dark, dirty throbbing HI-NRG meets Synthwave powered “BLACK ANGEL”, which was followed by the 4th ZGRT single, industrial inspired “GAME OVER”.

In 2016, Starkey released the sleazy Deep House anthem COME INSIDE EP on the Italo/Deep House imprint Three Hands Records. Starkey’s music career in New York began in 2013 with the release of his heartbreaking dance single, “Into the Sun,” which became a club favorite from Brooklyn to Los Angeles. His follow up 2013 singles, “We’re All Fucked!” and “Rats,” saw Starkey accurately predicted the current global political situation. The singles were followed by the release of the buzz creating full length album, DIY.